We use cookies to enhance your experience. By continuing to visit this site you agree to our Personal Data Protection Act and Terms & Conditions 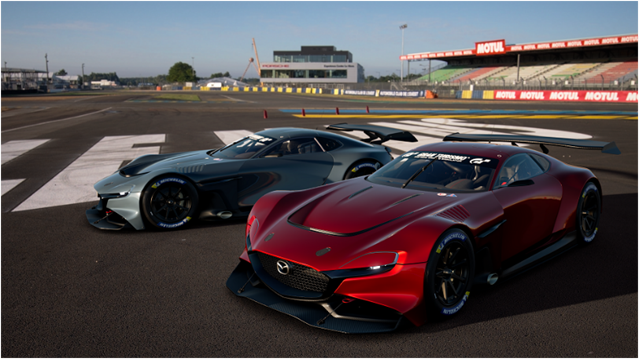 MAY 22, 2020 – We are pleased to announce that Mazda has just unveiled the "MAZDA RX-VISION GT3 CONCEPT" virtual race car, jointly developed with Polyphony Digital Inc. The RX-Vision GT3 Concept is Mazda’s newest virtual race car in Sony Interactive Entertainment’s PlayStation®4 driving simulation title, Gran Turismo Sport. Players from around the world will be able to drive the car to their heart’s content on all of the game’s set courses from 3.00pm (JST) on May 22 onwards.

The "Gran Turismo SPORT" Playstation®4 title is certified and promoted by the FIA (Fédération Internationale de l'Automobile) as an official platform of digital motor sport1. Players who use Mazda vehicles, such as the RX-Vision GT3 Concept, in Gran Turismo Sport will automatically be granted seed rights to participate in the FIA certified Gran Turismo Championship (World Tour) that will be held in various locations around the world in the 2020 season.

The "RX-VISION GT3 CONCEPT" is a virtual race car that appears in "Gran Turismo SPORT." Based on the "MAZDA RX-VISION," the car is modified in accordance with FIA GT3 race car vehicle regulations. The base vehicle "MAZDA RX-VISION" is a concept car that was unveiled at the Tokyo Motor Show in October 2015. This vehicle took on the challenge of achieving the most beautiful front engine rear wheel drive (FR) sports car that Mazda could conceive of based on the "KODO -Soul of Motion" design theme, and is equipped with a next-generation "SKYACTIV-R" rotary engine (RE). The model represents the vision of a sports car that Mazda hopes to make a reality in the future. 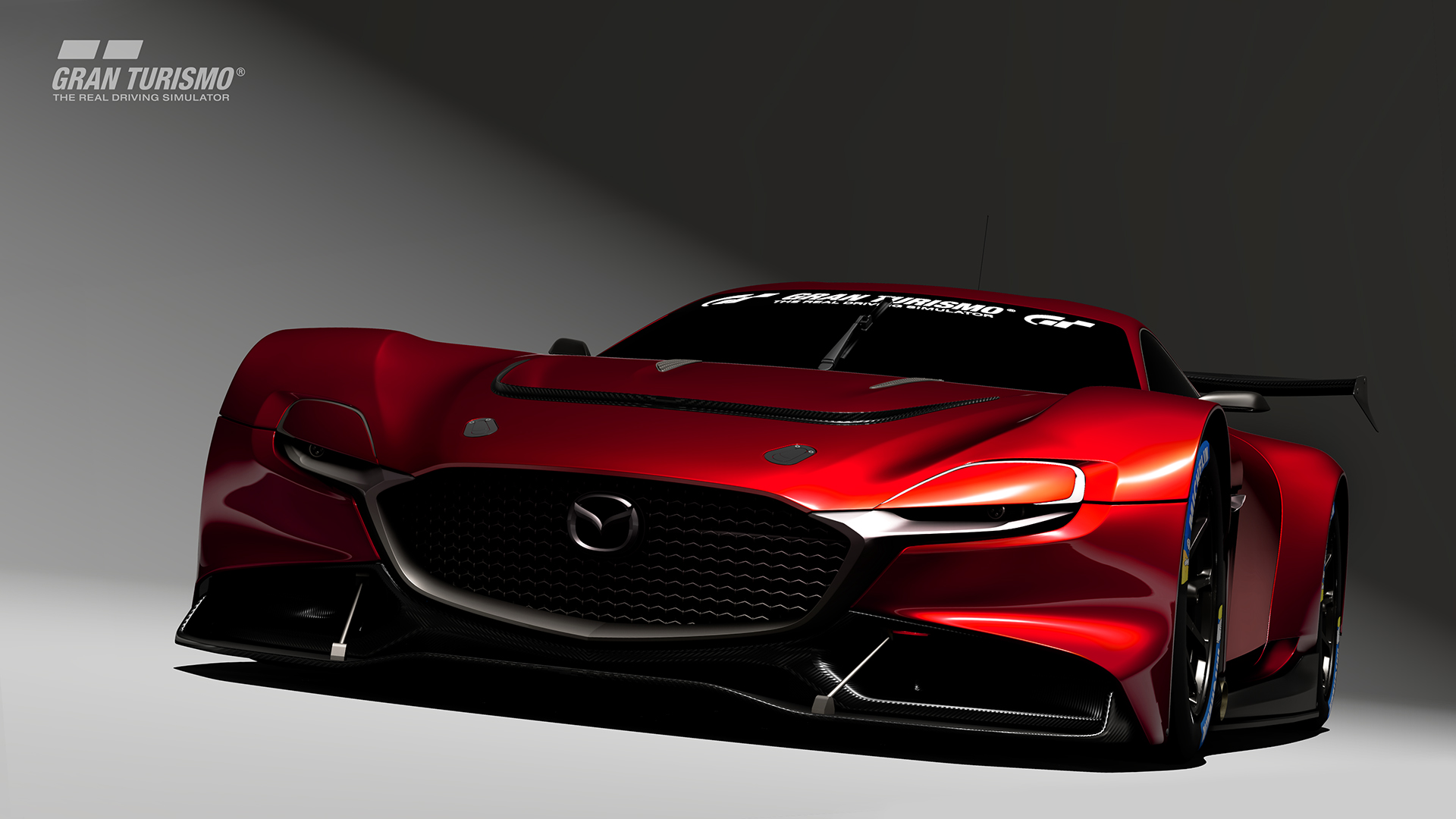 *The output and weight may change due to balance of performance (BoP) adjustments depending on the race.

The "RX-VISION GT3 CONCEPT" is a co-creation of Mazda's designers and Polyphony Digital's digital modelers. The original "MAZDA RX-VISION" was selected as the "Most Beautiful Concept Car of the Year" in the 33rd Festival Automobile International held in France in January 2016 and has been highly praised by countless people globally. 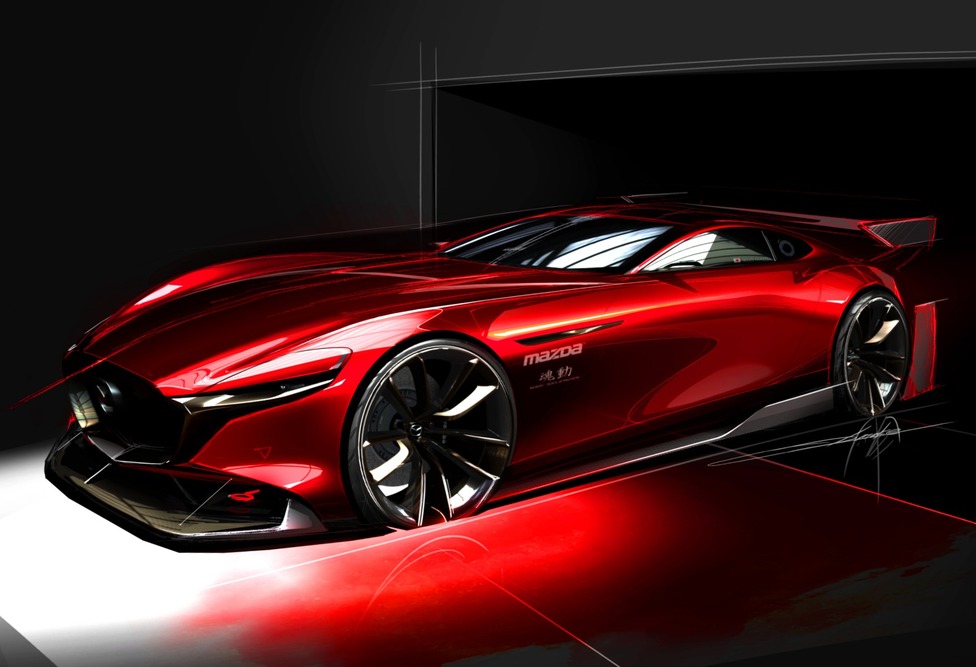 This design project started in the fall of 2019. An image sketch was released at the venue for the world final of the "FIA Gran Turismo Championship" held in Monaco in November of the same year where it was announced that the vehicle would be added to the 2020 update of "Gran Turismo SPORT". From then on, the design was steadily polished, with frequent back and forth between Polyphony Digital and Mazda Design, and the modeling work progressed from there.

The RX-VISION GT3 CONCEPT accords with the FIA ​​GT3 rules and performance requirements for race cars. While the original cabin and door shape are maintained in accordance with GT3 vehicle regulations, the front / rear tire treads have been expanded and it has received a wide fender. It is also equipped with a large engine hood outlet that improves both aerodynamic performance and cooling in the engine room, a front lower spoiler that controls cooling performance and front downforce, along with a rear spoiler and under diffuser that increases rear downforce and ensures rear wheel traction. The front projection area was minimized in order to improve the aerodynamics, and proportions were pursued that would reduce the vehicle height and set it lower. Weight reduction and a lower center of gravity were accomplished through removing unnecessary parts in the interior and replacing heavy materials. An ideal 48:52 front-rear weight distribution was also achieved. Each function within the cockpit was arranged with an emphasis on ease of operation during the race. In particular, the steering wheel uses a special design that improves operability. The interior layout of all Mazda models are developed in the pursuit of superior ergonomics and have earned the cars a high reputation. Similarly, the RX-VISION GT3 CONCEPT prioritizes aspects such as seat shape, driving position, pedal arrangement and visibility during driving as essential items. Whether a road car or a virtual race car, Mazda cars all share the philosophy of being "human-centered". 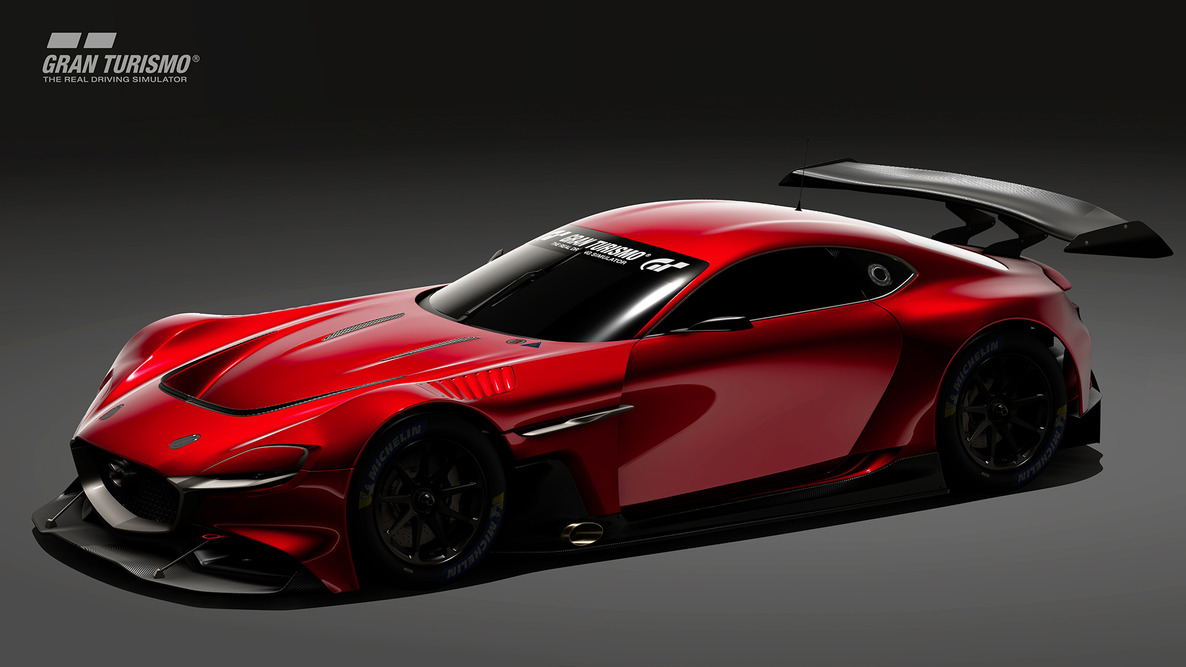 Similar to mass production vehicle development, the RX-VISION GT3 CONCEPT began with design sketch work for each component, followed by 3D digital modeling, and then completion of a detailed final design. This Gr3. virtual race car, designed to achieve a high level of competitiveness, was made possible through Polyphony Digital’s state of the art modeling technology.

Mazda aims to acquire more Mazda fans through conveying the joy and pleasure of driving to a wider range of people who love "Digital Motor Sport." The company is also considering projects that will enable individuals to jump from the virtual world to the real (participatory motorsports*, etc.) in an effort to attract fans who hope to enjoy driving a real car in the future and would like to participate in actual world motorsports.